My Uncle Joe passed away. He died too young. But he died the way he lived, on his own terms. He was a great guy—someone who lived on the edge of things. He got out of the neighborhood young, played stand-up bass in jazz bands, worked at food carts in the Village. Some of my friends knew him well—he’d come up and hang out when we were in Cochecton. He was my earliest model for an artist and thinker. He could fix anything. He was a caretaker. He was full of love and goodness. He knew how much of this racket is bullshit. I learned something from him every time we talked. The worst thing right now is thinking about my grandmother walking into his old bedroom and looking at pictures of him as a kid. I keep breaking down thinking about that. I also keep thinking about all the times—back when I lived in New Paltz—that I didn’t drive across the river to see him play in Beacon. Last time we were home in July—I think he must have known things could get really bad for him—he wanted to take me, my wife, and our son out for Chinese food in the city. We decided we couldn’t do it because it was our last day in Brooklyn with my grandparents. He’d been down a few days before to see us, we took solace in that. He’d insisted on mowing the grass until he couldn’t anymore. I took over after a few minutes and then we drove to Home Depot to get a part for something that needed repairing in my grandparents’ house. He was having trouble breathing. He wanted an Orange Crush. I’d never seen him drink a soda. That made me worried, and I never shook that worry. My mother and grandparents worried about him constantly. They tried to get him to go see a doctor, but he wouldn’t. He wanted no part of it. He’d covered his belly button when he came to visit my grandmother in the hospital last winter, saying that was how bad spirits got in. My mother and grandparents gave him space just as they always had—they respected his wishes. I don’t know what to say. I loved him. I’m so sorry he’s gone. My daughter will be in the world soon, and I hope she carries a big piece of him with her. Here he is with my son Eamon a few years ago. Rest easy, man. 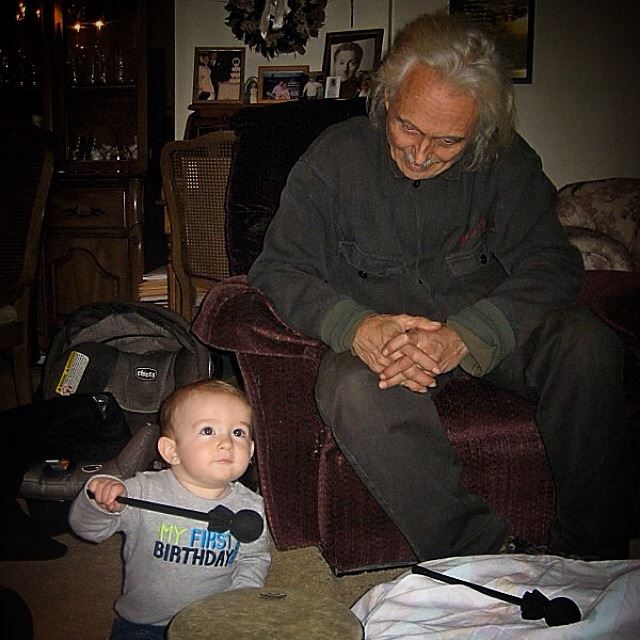